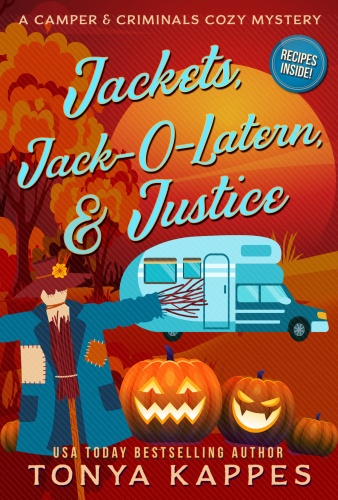 Let me be the first person to welcome you to Normal, Kentucky located in the heart of the Daniel Boone National Forest. I’m Mae West the owner of Happy Trails Campground.

Fall at the campground is my favorite time of the year. The bursts of orange, yellow, green, and red pop on the falling leaves, creating a colorful path along the trails for all of my guests at my campground is a real life picture that could never be captured by a camera.

Days are warm and at night you need a light sweater to enjoy the campfire or snuggle up in a cozy blanket.
The campground is full and the campers are excited to participate in Normal’s annual Pumpkin Carving Carnival.
It’s a little spooky seeing the hundreds jack-o-lantern faces all light up with toothless or toothy smiles.
It’s the dead body among them that chills me to the bone. 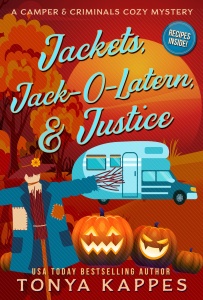 Chapter One
“A man is dead. Ranger John Buxley has been snooping around. You have a beard. You have a new camper.” I paced back and forth underneath the full moon on the edge of the lake in Happy Trails Campground.
If my adrenaline hadn’t been kicked in high gear, the rustling leaves and crunch of layers of pine needles that’d started to fall with the crisp, cool fall air—not to mention twigs snapping underfoot of something in the deep forest—I’d have gotten myself inside of the camper.
But no. I’d just found out Hank Sharp, my boyfriend, was wanted for questioning in a murder case a few hundred miles from the Daniel Boone National Forest where I owned and ran Happy Trails Campground in Normal, Kentucky.
“Yes. I did get rid of my camper because I needed to not be found. Yes. I’ve grown a beard so no one from the Mammoth Cave District would recognize me.”
I had no idea where this was going because he’d all but said he killed the guy while he was a ranger in that area.
“And I haven’t gone to the sheriff’s department to see Granny because I didn’t know if John Buxley had gotten to Al Hemmer yet.” Hank sat on the rock around the large campfire I had next to the lake for the guests to enjoy. Truth be told, I was a smidgen upset with him. I’d even suggested we sit outside instead of in one of our campers so I could keep the distance between us.
My eyes slid back to the crackling fire behind him. He was saying all sorts of excuses, and I’d like to say I heard him, but all I could think of was giving him a great big shove back into the red, yellow, and orange flames.
“Mae,” he said my name and looked back at the fire to see where my eyes had strayed. “I think I’ll move.”
“Good idea.” I started to pace again. “Do you know what kind of position you’ve put my business in? Forget me. What about the campground? I have all of these tourists staying here, and it wouldn’t look so great if it was raided and someone was dragged out in cuffs.” I threw my hands up in the air then planted them on my waist as I looked at him, where he was now sitting in one of the many Adirondack chairs along the banks. “I have employees to think of, and my home is here. If I harbor a criminal, a killer”—my voice rose an octave¬—“they will put me in jail, and my campground will be shut down. Closed for business.” I pointed a finger at him and gave him a good scolding. “I’ve worked hard for this place. Or do I have to remind you?”
“Oh no.” He shook his head. “I was the first person who met you here, remember?”
How could I forget? At that time and many jobs past, Hank was an agent, and my ex-Ponzi-scheming husband had escaped from prison, only to be found dead, floating in the very lake where Hank and I were at this moment.
“And exactly this. You thought I was harboring Paul,” I reminded him how he accused me of hiding the ex. “And now Ranger Buxley thinks I’m hiding you.”
“That’s what I’m trying to say. You aren’t hiding me.” He ran his hands over his thick black hair. The moonlight caught his strong jawline just right, and his green eyes sparkled.
I swallowed hard trying not to give into his good looks and let him off the hook. There had to be a reasonable explanation as to why Ranger Buxley wanted to find Hank, and an equally reasonable explanation as to why Hank hadn’t let Ranger Buxley find him.
Which brought me back to thinking Hank had killed the man in question.
“Go on.” I stopped pacing and stood in front of him with my arms crossed, tapping my right foot to exaggerate just how aggravated I’d become.
“They aren’t looking for me.” Hank eased back into the chair. He placed his palms down on the wide wooden arms. His chest lifted as he took in a breath.
“They are looking for me.” The woman’s voice was almost a whisper behind us. Like the whisper had caught on the chilly breeze as it fluttered past my ears and trickled across the lake.
The shadowy figure was about to come into the moon’s light, and when it did, I couldn’t’ve been more shocked.
“Ellis Sharp?” I questioned when Hank’s sister came into view. 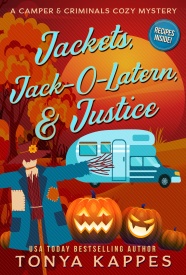