I shivered at the thought someone would even think that way. But I’ve learned that if I could think it, someone else had already done it. When it came to greed, money, or jealousy, people would stop at nothing. It didn’t matter about their morality.

“It has been brought to my attention from various citizens that the lines down at the courthouse for all the branches of government has been a longer wait than usual. What some considered a social hour while going to get their driver’s license renewal or sheriff’s inspection for their new vehicle, has turned into a couple of hour wait time with no socializing to be had. In fact, the growing population in Normal has the citizens concerned. One concerned citizen stated that when he approached the Mayor about what the planning and zoning was going to do about the new subdivision being built by Rod Blair or Blair Builders, the Mayor just smiled at him and told him economic growth was good for Normal.

Economic growth good for a national park? That should be the question posed to Mayor Courtney Mackenzie when in fact land development only creates more of an environmental issue when it comes to the stability of the mountains, cliffs, caves and trails the park was built around. If all of those are compromised and taken away, why would anyone want to come visit Normal for the outdoor vacation they have embraced?

These are questions we here are the Gazette are working on for you, our loyal readers of the Normal Gazette. Stay tuned. Editor in Chief, Violet Rhinehammer.”

Whooohooo!! Be sure to catch up on what Violet is doing in this week’s release of JACKETS, JACK-O-LANTERN, & JUSTICE!

I have always found secondary characters are just as important as the sleuth. The main sleuth really can’t be the quirky character for me. It’s the secondary characters I love to throw in the side of quirky.
In #acamnperandcriminalscozymystery I have a few side quirky characters!
Here is a fun character post from Channel Two’s very own Violet Rhinehammer!
Let me know in the comments one thing you LOVE about Violet for a chance to win ONE of five $5 Amazon gift cards! 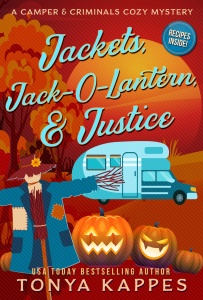