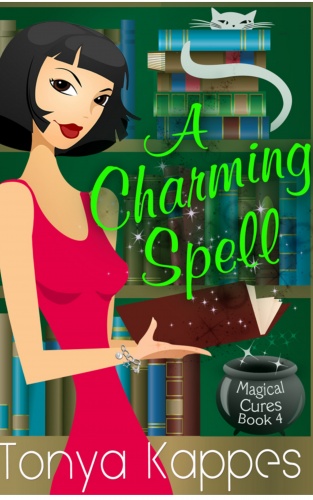 There is a new store Whispering Falls, Kentucky. Ophelia Biblio, the owner of Ever After Book Shop, has a power that no one else in Whispering Falls has. She’s a witch and her shop is magical.

June Heal is on a mission to come up with a special cure for Sheriff Oscar Park to help him regain his memory, while working hard at being the best newly elected Village President of the magical village.

Alexelrod Primrose shows up on June’s doorstep begging her to block the opening of Ever After Books, making her wonder if opening the village doors to witches is a good idea.

When one of the Spiritualist turns up dead and Oscar Park is falling in love with someone else, June has her hands full trying to solve a murder and fix her love life. 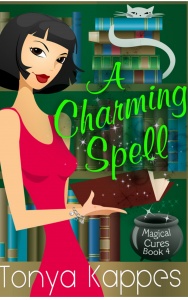 Chapter One
“June, June, wake up.” My head bobbled back and forth on my pillow, because my neighbor, Oscar Park, was shaking the crap out of my arm.

“Shh…” I mumbled with my eyes shut tight, even though seeing my blue-eyed, black-haired hunky neighbor was a much more pleasant sight then my dark eyelids. “You’ll wake Darla.”

Darla was not like every other mom. She was, well…different. She owned and operated A Dose of Darla, a booth at our local flea market in Locust Grove, Kentucky, where she sold her own versions of homeopathic cures that she concocted in the basement of our small Cape Cod home.

And Oscar…well, he was a different story. Oscar and I had a lot of similarities. He was raised by his Uncle Jordan after his parents were killed in a tragic car wreck, while I was raised by my mother after my police officer father got killed in the line of duty.

Anyway, Oscar always had a habit of sneaking into my room at night, but not without my all-time favorite treat, which Darla didn’t allow me to have, Ding Dongs.

“I’ve got a present for you.” Oscar waved his temptation underneath my nose. I didn’t have to open my eyes to know it was my favorite chocolaty treat.

Beep, beep, beep. My alarm woke me up, bringing me to my current situation.

“No, no, no.” I begged and reached over to tap the snooze button. Mr. Prince Charming was curled up on my pillow, unaffected by the beeping hunk of junk. “I was having the best dream too.”

I brushed my bangs out of my eyes so I could see the clock. I had a few more minutes, so I wiggled back under my covers. I closed my eyes, trying to remember the dream, but it only brought back memories, some of which I would like to forget.

Oscar Park and I had come a long way since those days of him sneaking into my bedroom window. Especially now since I lived in Whispering Falls, Kentucky and he was living back in Locust Grove.

Ah. . .the good old days, I sighed and closed my eyes.

The good old days weren’t that long ago. Now, everything had changed.

Chapter Two
Knock, knock, knock. My heart nearly leapt out of my chest when I heard someone at my front door. Maybe my dream was coming true.

“I guess we aren’t going to get to snooze.” Madame Torres, my cynical crystal ball, glowed red with swirling gold flecks. It was a sure sign she was not happy, which was not a great way to start my day.

“No, I guess not.” I was sure my dream was just wishful thinking that Oscar hadn’t given up his spiritual powers and any memories of me being a spiritualist, just so he could help me out in the sticky situation I was in at the time.

I threw the covers off me. The cold air hit me, sending a chill across my arms.

Rowl, rowl. Mr. Prince Charming, my fairy god-cat, growled when my covers landed on top of him.

“Oops.” I laughed and peeled them back. His white-as-snow fur was sticking up from a little static electricity.

Bang, bang, bang. The gentle knocking had turned into an angry “answer your door now” knock.

“I’m coming!” I screamed, reaching for a sweatshirt that didn’t match my pajama bottoms, but it was going to have to work.

I wasn’t going to let anyone ruin my day. It was going to be great! After all, tonight was the village council meeting and my first time as the newly elected Village President.

Geez. When did everyone get in such a hurry? I walked down the hall, flipping on light switches as I went.

“This better be important and you had better have brought me a coffee,” I warned before I swung the door open.

“June,” Alexelrod Primose, Whispering Falls’ only realtor pushed past me without an invitation to enter. “You have to stop the sale of the old building that is next to Bella’s Baubles.”

He stood about five-foot-eight with his round-brimmed hat resting on his head. It dawned on me that I had never seen him without his hat or his long black overcoat.

Alexelrod swung his briefcase in the direction of my kitchen table and proceeded to follow in that direction as if the briefcase was dragging him along. “We need to discuss this.”

“I…” My hand was still on the door handle. Gently, I closed it behind me and crossed my arms in front of me. “It’s early. Can we discuss this later?”

“Later? Absolutely not.” His voice was firm and final. He slammed the briefcase on the table. “This could change how Whispering Falls does business…forever.” Lines formed around his deep-set worried brown eyes.

“Forever is a long time.” I didn’t want to get sucked into a long debate over whether or not a new shop was going to destroy Whispering Falls. My intuition, which happened to be one of my spiritual gifts, never failed me. It wasn’t warning me at this moment, which meant that this conversation could wait. At least until I had my first or third cup of coffee. “What kind of shop is going in there anyway?”

Not everything had been transferred over to me from Isadora Solstice, the last Whispering Falls Village President. Any deals made with new shop owners before last week was all her doing. We had plans to catch up before the meeting tonight to discuss anything new…like this.

I walked over to the sink and looked out the window overlooking the meadow that bordered the village. I was lucky to have a house nestled on a little hill that overlooked the magical city I called home.

The lush green grass was beautiful as it rolled down to the city. The sun was just making its first appearance overtop the mountains that surrounded Whispering Falls, putting off a faint light.

“A bookstore of all things.” Thump! Alexelrod’s beat his fist, causing the briefcase to burst open. Papers flew out all over the place.

Alexelrod didn’t care. He was deep in the large black case tossing out even more papers on the table. Mr. Prince Charming was perched on the couch behind the table in my family room.

Ugh. Inwardly I cringed. Mr. Prince Charming had his back leg stuck straight up in the air as he bathed himself. That meant that I was going to have to clean the fur off my beautiful orange couch when he was finished.

“A bookstore?” I questioned with an escalated voice. “I love books!”

“Dead serious.” This entire conversation was giving me a headache and dose of liquid happiness was exactly what I needed. My new single-cup coffee maker was perfect for me. I picked out Java Jolt. That sounded perfect. “Would you like a cup of coffee?”

“How could you even think about coffee when this is of the utmost importance? Urgent!” His eyes narrowed as he pumped his fist in the air.

“Nothing is urgent at this time of the morning.” Well…almost nothing. The clock on the stove read six am.

I had set my alarm early because I wanted to get to my shop, A Charming Cure, a couple of hours before it opened. There was a potion I needed to work on that was of the utmost  importance. A spell to get Oscar’s memory back. His memory of why I had moved to Whispering Falls.

I sat in the chair next to Alexelrod and pushed his papers toward him.

“I understand this is important to you.” I had to make him feel somewhat comfortable coming to me since I was the Village President. “And it just so happens that we are having a village meeting tonight where you can discuss these issues with the community leaders.”

He grabbed the papers. They wrinkled as he wadded them up and threw them back in the briefcase before he slammed it shut and locked it up.

“Good day, Madame President.” He stood up, tilted his head, and bee-lined it to the door, his lips pursed tightly.

“Alexelrod, please understand that if I allow one person to come into my home and suggest things for the community, then everyone will want to.” There had to be a line drawn somewhere. I just didn’t know where.

Obviously, Alexelrod had no interest in what I was saying. He opened the door, and without turning back around, slammed it behind him, almost catching Mr. Prince Charming’s tail as he darted through right behind Alexelrod.

“Where are you going?” I shouted toward the door, before glancing out the window.

Mr. Prince Charming didn’t turn around either. He darted down the hill. I watched until his tail danced out of sight. 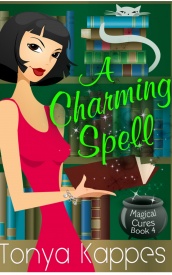