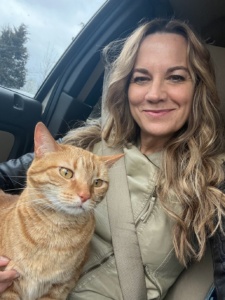 Tonya Kappes has written more than fifteen novels and four novellas, all of which have graced numerous bestseller lists including USA Today. Best known for stories charged with emotion and humor and filled with flawed characters, her novels have garnered reader praise and glowing critical reviews. She lives with her husband, two very spoiled schnauzers, and one ex-stray cat in northern Kentucky. Now that her boys are teenagers, Tonya writes full-time but can be found at all of her guys’ high school games with a pencil and paper in hand. More than anything, Tonya loves to connect with readers, with a loyal ‘street team’ of fans and followers on social media. Be sure to check out her Facebook, Twitter, blog and newsletter!

I’m not like most authors. I didn’t come out of the womb wanting to be a writer. In fact, I didn’t even like to read, giving my parents fits when I didn’t do book reports or required reading. But I did okay. I graduated from college, got married, had a baby boy, got divorced and got depressed.

My ex husband’s custody was every other weekend and every other weekend I found myself lying in bed, not eating, not sleeping, not among the living until my son came home. I had gone to my doctor and begged to be put on medication. She refused, telling me I needed a hobby. During this time knitting was becoming very popular and a yarn shop had opened near me. If I could’ve burnt the steel needles I had bought, I would have. That hobby lasted three week and I was still depressed.

The only thing I knew to do was go back to school and get my masters. School had always come pretty easy to me and any type of studying I needed to do never took up the entire weekend while my son was gone.

One of my fellow classmates asked me to join her book club. I laughed and informed her I was not a reader. But she insisted I needed to get out among the living and I insisted I was fine and politely declined her book club offer. She was relentless and even offered to have it during the weekend my son was gone to his dad’s. She continued to ask me and I continued to decline until she told me they had chocolate and wine. I asked what time.

I went and was pleasantly surprised at how book club worked. I had no idea the first twenty minutes was spent waiting on every member to get there, the next five minutes we discussed the book, the next book was selected, and the next hour was spent catching up on the local gossip. Book club was kind of fun.

I actually got out of bed the next day and went to the bookstore to just buy the next book, though I had no intentions of reading it. In fact, the book sat on my nightstand until my son went to his father’s on his next visit.

I was back in depression mode, lying in bed when I looked over at the book. After staring at if for three hours, I picked it up and read one page, then two, then three. The next thing I knew, I was fifty pages in and had gotten lost into a world other than my own. I even found myself laughing out loud a few times and forgetting about my own hurt.

The fifty pages turned into one-hundred. One-hundred pages turned into me finishing the book, getting out of bed, driving to the bookstore and purchasing another book by the same author. I found myself unable to put books down. I went to the bookstore on a regular basis. I even got a library card. I was discussing books with co-workers, friends and even exchanging books.

The world of fiction had become my hobby, my drug. And when my son was gone to his father’s I no longer stayed in bed. I was walking and functioning among the living. My world had become a whole lot brighter from reading.

Fast forward a few years, I’m remarried with four little boys and still in book club. I was happy. Then. . .my husband realized my spending for books had exceeded my spending on my shoes. He picked up one of the books I was reading and he began to read it. For twenty minutes, while I get ready to host book club, he read the book. He sat the book on the kitchen table and leaned against the counter with his arms folded. He told me that I could write a better book. I laughed, shooing him out of the kitchen and get the boys out of the house so I could host book club.

The book club members came and we did our twenty minutes of waiting until others showed up, five minutes of discussing the book, picking the next one, and the next hour catching up. During this time, Cincinnati (a stones throw from my home in Kentucky) was having some rioting in the downtown area of Over The Rhine. We were discussing it and I was telling them the riots saddened me because I had fond memories of Over The Rhine because my Great Aunt Grace had owned and lived in an apartment building there in the 50’s, 60’s and 70’s.

Aunt Grace was eccentric. She was fun and her life was true to the saying: truth is stranger than fiction. I told my book club members some of my stories about my eccentric Aunt.

One of the book club members told me that I should write a book about my Aunt Grace because I could tell a good story. I laughed, but her words and my husband’s words became tattooed in my brain.

After the book club members left, I went up stairs and woke up my husband asking him if what he had said earlier about me writing a book was true. He said yes. Then I asked him if he thought I could help one reader come out of depression like books had done for me. He said yes.

That was all it took. I never looked back. Twenty-six novels later, I’m a full time author with four teenage boys (ages 21, 17,17, and 15). My novels have graced the USA Today Bestsellers lists, Amazon top 100, Amazon Movers and Shakers, and International Bestselling lists along with many prestigious awards.

Those aren’t my greatest accomplishments and isn’t what validates me as an author. It’s the reader emails I receive telling me how I have helped them in their daily struggles by giving them a world to escape. I started this career with one thing in mind, the reader and helping them. I continue to keep that as my goal and hope to continue to help them, give them hope, and make them smile.

I’m thrilled to be the newest member of the Girlfriends Book Club! I promise my posts won’t be nearly this long all the time, but I had a lot to say….after all, I am a writer. *grin*

Practice What You Preach

Anyone who follows me on the internet or knows me in real life can tell you I’m a positive and upbeat person. I’m a glass is half full kind of gal. Of course I have had rejections and it hurts, but it’s up to me and only me to how I react to those rejections.

Just like the rest of the girlfriends here on our blog, I was rejected so many times that I turned it into a game. When I’d send my manuscript off into the world of agents and editors, my kids and I would would shout out a number of how many agents/editors weren’t GOOD ENOUGH for my story. Instead of saying I was REJECTED…I’d turn it around and say they couldn’t handle me. Now that might sound a little arrogant and I’m far from arrogant. I have four boys and I was trying to teach them a lesson about persistence and staying positive.

I cringe when I hear people say “life is hard!” Life isn’t hard, it’s all in how you look it. Of course there are obstacles that get in our way, it’s up to you to find out how to get around those obstacles. If you want something bad enough. . .you will keep at it.

I continued to write and write and get rejected from “experts”. There is no better expert than readers and what readers will read and that was when I decided to self publish. It wasn’t until I sold over 80k copies of my self published mystery novel, A GHOSTLY UNDERTAKING, over a couple months time did the “experts” deem me worthy of a traditional publishing contract. Did I deem them worthy of republishing my novel? I’m glad to say that A GHOSTLY UNDERTAKING along with three other books in the GHOSTLY SOUTHERN MYSTERY SERIES was bought by HarperCollins on my terms and my expertise I had gathered since self publishing for over three years.

My kids….well, they are go getters and glass is half full kinda of guys. They don’t take rejections as a failure, they take rejections as a reason to hustle and keep going. Our oldest son took a dream and hustled through rejection, fear, and hundreds of kids to make his dream come true. We are proud parents of a college soccer player.

I’m also proud to say that my rejection and persistence paid off for me to realize my dream. Yesterday was the rebirth of my novel, A GHOSTLY UNDERTAKING, with a traditional publisher, HarperCollins. And now I have a whole new set of rejections that might come my way or do I? Nah…any negative I will turn into a positive and a teachable moment to make my next book release even better!

One Comment on “Throwback Interview! This is how it started!”