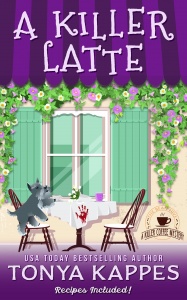 I love this throwback character post of Bunny Bowowski!!! I hope you do too!

You can grab a regular coffee from the coffee bar or a tea. But you look like you want one of them fancy drinks like a latte, or one of them caramel macchiato. You know, they are filled with sugar. Don’t take my word for it. I’m just an employee that’s making those Killer Lattes, ummm, Star Studded Lattes since Lemon Productions is here filming a movie.

But I bet you’re here to check out all the noise about the #killerlatte. I mean, really. Just because that Hollywood actress, Daisy Lemon, came in here to get a Star Studded Latte but was kidnapped in the process, doesn’t make it a #killerlatte.

But you’d have to ask Roxanne Bloom, Roxy if you know her, about any sort of particulars. She was the one who seen Daisy last. I probably shouldn’t tell you this, but she’s asked me to look after the coffee house while she headed down to the police station.

Mmmhmmm. Now I did hear the ransom note was accompanied by a photo of Daisy. She was dripping in diamonds. And not just any diamonds. All the diamond jewels used in the movie. I bet that’s got to be heavy around her neck.

I heard Low-retta Bebe. . .huh? Oh! You don’t know Loretta. We call her Low-retta because when she says her name, her southern accent, well, you know what I mean.

Anyways, Low-retta owns Diamond’s downtown and she offered all her jewels for the production company to use while they were filming. Daisy Lemon had all them on. Ain’t that strange?

Oh no…the police didn’t leak the photo. Maxine Bloom did. She’s got her sneaky ways to getting things. She write Sticky Situation, the gossip column in the Honey Springs Newspaper. But claims she’d doing a piece for People and she got her hands on the kidnapper photo.

Now that’s just hearsay because I ain’t seen the photo.

I’ve rattled on enough. You enjoy your Killer Latte, I mean. . .you know what I mean. Y’all come on back. Remember that around these parts, the gossip is just as hot as the coffee. Toodles!

Readers: Do you like recipes in your cozies? Do you ever make the recipes?