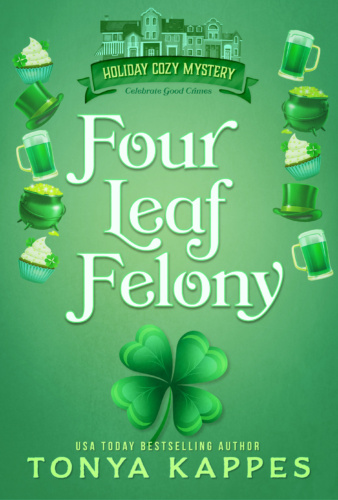 Book -0.5 in the Holiday Cozy Mystery

Violet Rhinehammer finally got the big break she’s been waiting for. She got the interview of a lifetime and it is only a plane ride away.

Things take a twisty turn after Violet discovers a dead body in the airplane’s bathroom. With a forced emergency landing she finds herself stranded in the tiny seaside mountain Village of Holiday Junction.

Holiday Junction loves all things holiday and currently the town is painted green for their annual Shamrock Festival. Unfortunately the NTSB has grounded any flights in or out of Holiday Junction until the crime scene is wrapped up, leaving Violet scrambling to get to her interview.

Violet takes on the investigation and enlists the help of some of the locals, new friends, and a cute security guard to help her solve the mystery.

Join Violet, Cherise, Rhett, and a lineup of new as well as familiar characters from A Camper & Criminals Cozy Mystery Series, as they try to catch a killer and get Violet to her dream job.

Book -0.5 in the Holiday Cozy Mystery 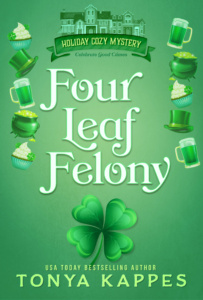 “And my daughter.” The pride spilled out of the woman. Her smile, her eyes, her entire face lit up as she showed me the photos on her phone. “She has three little children. Let me tell you”—she put her hand on her chest—“I never thought the girl was going to give me any grandbabies.”

I slowly sucked in a deep breath, reminding myself that this was just a temporary situation. After the airplane landed, I’d never have to see this woman again.

She’d done this a time or two. I wasn’t her first grandchild-photo-dump victim.

She stared at me.

She bragged on her three grandchildren, which I was far removed from. I mean, honestly, I had no idea what I was going to do for the rest of this four-hour airplane ride.

I knew I shouldn’t have made eye contact when I first got on the plane. It gave her free rein to talk and talk.

The only hope I had was the connecting flight. What were the chances she’d be on that one and be seated next to me?

“Excuse me for a second. I had a little too much Diet Coke,” I told her and unbuckled the safety belt.

I stood up and took a big deep breath before I took my first steps of freedom away from my seatmate.

This entire plane ride was nothing like I had in my head when I woke up. There were things I needed to do to prepare myself for the big gig, and listening to this woman was exhausting me. I would’ve loved to hear about little Lizzy and her brothers on any given day, just not today.

Today was the day I’d been waiting on for—well, I couldn’t even remember how long. That was long if I couldn’t remember.

“Get yourself together, Violet,” I told myself under the fake smile as I stepped over a child playing in the aisle when the child should’ve been in a family member’s lap. I tossed my long blond hair, which was perfectly styled today, over my shoulder.

Carefully I stepped over her and continued down the center of the airplane toward the bathroom.

All eyes were on me. I’d been a reporter in my hometown of Normal, Kentucky for Channel Two news, where I also had my own show called “Good Day in the Park.” I also had an article in the local newspaper, so I was used to the perfect smile.

I’d spent my career giving up any social life so I could get my one big break. This was it. Nothing was going to ruin it.

Just a few short days, you’re gonna see me on TV, being a big-time reporter, I thought to myself when I noticed people glancing up at me.

Like my Aunt Lucinda told me, Violet, honey, you’ve got to fake it until you make it. That was exactly what I had done in Normal, and here I was—on my way to making it big!

The flight attendant was busy getting the little food cart ready to push down the aisle and stepped out of the way of the bathroom door when she noticed me going for the handle.

“Are you having a good flight?” she cordially asked. Her brown hair was parted to the side, pulled back into a low ponytail. The maroon uniform showed off a very appealing figure that showed she took care of herself. Something I could definitely understand.

It was one of the many things I needed to do to stay camera-ready at any moment.

“Yes. I am.” I curled my fingers into the small opening of the handle and pulled the accordion bathroom door open. “Oh my gawd!”

My body shook. My breath heaved in and out at a rapid pace.

I slammed the bathroom door shut.

“You’re having a panic attack. It’s okay,” she assured me, reaching behind her to get one of those throw-up bags. She put it in my hands. “Just breathe slowly in and out into the bag.”

“No.” I shook my head, trying to get away from the bag she’d shoved into my face. “Body. Body,” I gasped and pointed to the bathroom. “There’s—” I rolled my eyes up and tried to take a deep breath. “There’s a body.”

I pointed and gave up, resting my head back against the airplane’s wall.

“Someone was in there?” She made an eeck face and smiled. “They probably forgot to lock the door. It happens all the time.”

I reached up, grabbed the front of her uniform jacket, and dragged her down face-to-face with me.

“Dead body. Blood.” It was all I could get out. 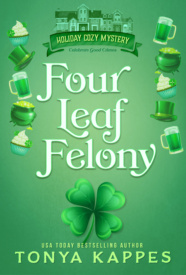