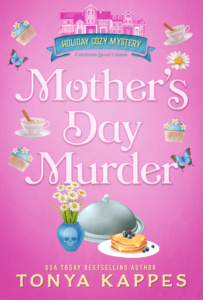 “Hey! Don’t I know you?” It was the first thing I heard before I’d been able to take a sip of the steamy hot cup of coffee I’d gotten from the Brewing Beans, the local coffee shop in Holiday Junction.

I’d not even gotten the toe of my shoe on the first step of the trolley before I heard the familiar voice.

“You!” The trolley driver shook her finger at me.

“Yes. I’m the new reporter for the.” I started to rattle off my new job at the Journal Junction the local newspaper.

“No. No. No.” The visor she wore on her head had blinking lights on it.

Of course it did. Everything in Holiday Junction was either light up, glittered, sparkled or shined. And if it didn’t, the residents of the small town made sure it did somehow.

“It’s me.” She took her hands off the trolley wheel. “Goldie Bennett!”

My eyes narrowed as I looked at her trying to recall any sort of memory of her but I was pulling a blank.

“You know Joey, Chance and Lizzy’s grandmother,” she said it like I should know these people. “Duh,” her mouth was open. “From the airplane. We were seatmates.”

“It’s ten o’clock a.m..” she told me like she didn’t believe my excuse. “Different strokes for different folks,” she muttered and put her hand back on the handle before she said, “Are you riding or not?”

“Yes.” I took the last step up into the trolley, barely making it inside before she whipped the door shut nearly catching my heel, which would’ve hurt if it did get caught since I was wearing flip flops.

right up front next to Goldie.

I eased down, careful not to spill my coffee, and put my briefcase in my lap.

“Well aren’t you going to ask about Joey, Chance, and Lizzy?” Goldie asked out of the side of her mouth as the trolley rattled down the Main Street before it hung a left down Peppermint Court, a row of really cute cottage style houses that not only had the feeling of living in the city but also a nice view of the dunes and sliver of the seaside.

“How are your grandchildren?” I was having déjà vu all over again from the first time I’d met Goldie. My hands started to tremble thinking about it.

No. She wasn’t terrible to sit by now that I knew was had come after. Of course I was in a different mindset when I stepped on the airplane that morning. I thought I was headed to my dream job in California as a big-time new reporter for a national news station. Little did I know when I sat down next to Goldie, I would excuse myself to get away from looking at photos of her grandchildren to go to the bathroom. I had to be in the zone for the shot at the big time but when I found a dead body in the airplane’s bathroom, my life took a turn that I never saw coming.

Just like this morning. I never in a million years thought I’d see Goldie again. At least she didn’t ask me about the body or worse, seen all the social media memes that’d been created of me after I’d gotten the brilliant, not so brilliant, idea to go live to show off my reporting skills since I was the only reporter in the locked down airport.

Reporter 101 tip, if you do go live on the spot make sure your eye make-up hasn’t bled down your face creating a stream of black tears. Not a look viewers want to see.

“You know, we are in full swing of tee-ball. Lizzy. Whooo-wee that Lizzy. She can rock a pink tu-tu better than any of them dancers down at the Groove and Go.” She whipped the trolley down a back alley before she took a right back on Main Street so we could head the opposite direction. “Elvin isn’t happy with her going down there because he said Tricia Lustig don’t need all the money,” she tsked. “You know they’ve got that Lustig Spring everyone goes on and on about.”

The trolley came to an abrupt stop. Goldie leaned to the right and grabbed the handle, pulling the trolley door open.

“Your stop.” Her chin swung over her right shoulder and she looked at me.

“Already?” I looked up and saw we were already at the office of the Junction Journal. I stood up about to take those steps off the trolley. “I didn’t know I told you where to stop.”

“Now, now, Violet.” She tsked again, only a little louder this time. “Everyone knows who you are in Holiday Junction. They can’t say that they really know you like I do.”

I stood on the side of the road staring back at her wondering exactly what that meant.

She slammed the trolley door shut and took off heading to the next stop.