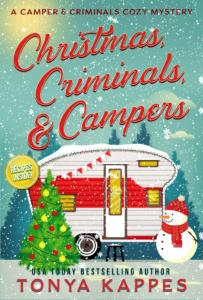 Normal, Kentucky….how did I end up here? Writing in a can-ham camper? In the middle of the Daniel Boone National Forest?

Yes. I talked to myself in third person. After all, I’ve completely lost all of my identity as an author. Especially with the release of my latest steamy romance, Cozy Romance in Christmas.

I was hesitant to tell my agent about it. After all, she was beyond normal when I told her I was changing genres. She was downright beside herself. And. . .I also told her that I was not going to let her with my newest contract since I was going to self-publish. I was tired of giving her all my money when she did nothing to deserve it.

Sure, she got me my first contract years ago, but after that book took off and made it to number one on the best seller lists, she’d gotten her fair share of my hard earned money. Now all I wanted to do was escape for the winter and write what I wanted to write.

That’s exactly what I was going to do in Normal. Until. . .I showed up to the campground where I’d rented the cutest vintage camper and it looked like Santa had vomited Christmas all over the camper and the yard.

Apparently, the local librarian, Abby Fawn was a super fan and took my plots to heart. My heroine loves Christmas decorations. . .I do not. When I agreed to meet with the local book club, The Laundry Club book club, I had no idea they actually met in a laundromat.

Did I mention I was in Kentucky?

Abby had agreed to host me at the library for the book club instead of the laundromat, but I had no idea she’d invited the entire town. I was hoping to avoid any sort of media and lay low for the winter, but Abby Fawn had other ideas for my temporary citizenship.

Abby also found out a big secret about me and my career that I never wanted to see the light of day. My agent suggested I donate a big basket of books and apologize to Abby, who was going to meet me at the library to accept the donation. I’ve walked all over the library, but no one was here, so I decided to wait in her office.

“What are you doing here?” I’d turned around when I noticed it was Abby who’d shown up to the library. “What are you going to do with that knife?”