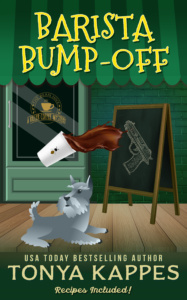 “Settle down.” Aunt Maxi stepped in front of the entrance of the Bean Hive Coffee Shop. “I’ll go see what is going on,” she assured me.

“I’m fine,” I told her after we’d run to the front window of my coffeehouse to see what the shrill screams were about. “I’m a couple of months out from surgery.”

Over the Christmas holiday, I had been a little nauseous. I had put it in the back of my head believing it to be a side effect of stress. Let’s face it, who didn’t have some sort of stress? Stress affected us differently, and I was no stranger to feeling sick to my stomach when I was extremely stressed.

“You wait right here.” Aunt Maxi ran her hand over my black curly hair before she pushed it behind my shoulder. “Your pretty blue eyes still aren’t sparkling like they normally do. That’s how I know you’re not up to one hundred percent.”

“It was my appendix, not my heart.” I sighed and tried to get out the words before she opened the door, passing a couple of high school kids on the way in. “Good afternoon,” I greeted them and turned my attention back to the customers. “Let me know what I can get you.”

They nodded and made their way over to the table Birdie Bebe had reserved for her weekly tutoring session for her fellow classmates and herself.

Birdie Bebe was Loretta Bebe’s granddaughter. She’d been living with Loretta for about a year now and really found Honey Springs, Kentucky, to be her home. I loved her. She’d really not only become a part of my family, but also a very valuable employee to me.

She was one of those kids who could see what needed to be done before she was even asked to do it. There were times when I didn’t see something and she picked up on it before me.

Though she worked for me every afternoon after school, I’d started to take the afternoon shift when she asked if she could host her weekly tutoring session here. Of course I agreed to it because I wanted her to succeed in school but also because it gave me a chance to see all the customers who did come in later in the day when I wasn’t there.

“Do y’all need anything?” I asked the group of students and their teacher, Hope Mowry.

“Is your oven set to four hundred?” Hope asked.

“I’m not sure, but you can go on in and check.” I had gotten extra insurance for Birdie’s tutoring sessions here at the coffeehouse because it was actually her home economics class.

In fact, it wasn’t even a tutoring lesson. That was just what Birdie called it. The time the handful of students and Hope spent together was actually Hope giving them the opportunity to learn what they would learn next year in school in her class.

These students weren’t graduating this year. The class itself was going away. The home economics department was the first to be cut from next year’s curriculum.

These students loved it so much, Hope had agreed to cram as much as she could in during the spring semester if they could find a place. Naturally, Birdie knew I had several industrial ovens in the kitchen and a large workspace to go with it, and she asked me.

After I looked into what the insurance would be just in case someone got hurt, I’d decided it was in the budget to host the group once a week and sometimes on Sunday, now that spring had arrived.

“Thanks, Roxy.” Hope smiled through the unspoken broken heart she had over the school board decision to cut the department.

She followed me back to the counter, where she disappeared through the swinging kitchen door.

“Do you see anything you like?” I asked a customer who’d been pacing back and forth between the two display counters. One had donuts in it while the other had cookies and pies.

“I’m so torn between the red-pepper donut here and fireside cookies.” Her brows knitted.

The bell over the door dinged, and Aunt Maxi bolted through. Her eyes caught mine as she brushed her hand through her short pink hair before she ran it over her face.

“It’s a dilemma I hear all the time.” I plucked a plastic piece of parchment paper from the box with one hand and grabbed a to-go bag with the other. A talent I’d learned to do over the years, flicking the bag open. “Why don’t we do a buy-one-get-one-free deal?”

I nodded with a forced smile on my face.

“That’s great. I’ll take the fireside cookie. It looks like a s’more.” She pointed to them after I slid the door of the display counter open and took out the sweet treats she’d asked for, slipping them into the bag.

“You can follow me down there,” I told her and walked down the back of the counter to meet her at the register.

“What has this town come to?” Aunt Maxi walked around the counter. She didn’t officially work for me, but she did own the building and a few others located here on the boardwalk, and she had graciously offered to help me when Birdie had her class here.

It was a big help too. Well, most of the time, when she wasn’t using the time she was here as her social hour. She had no problem giving her friends free food and drinks while sitting for about an hour and taking in all the news and goings on around Honey Springs.

“There was a drive-by purse snatching.” She had turned her head slightly to the right in the direction of the mayor. “I have no idea what is going to come of this town if we don’t stop this crime!” Her voice grew audibly louder and louder with each word.

“Purse snatching?” I asked, making sure I’d heard her correctly.

“Purse snatching?” Hope had come back through the door.

“Yes. And on a moped!” Aunt Maxi had finally gotten the attention of the mayor. He cleared his throat and stood up. “There was duct tape holding the darn thing together too. I saw it with my own eyes.” Aunt Maxi’s words were running together.

For a second, I thought he was going to come back to the counter to address Aunt Maxi, but when the bell above the door dinged again, it was Sheriff Spencer Shepard.

His jaw was hard, and his green eyes had a serious look in them. His thick neck gave way to his deep chest beneath his brown sheriff’s uniform shirt where he proudly wore the five-point-star sheriff’s badge on the front pocket.

When he took off his sheriff’s hat, like most men did when they entered an eating establishment, the waves of his sandy-blond hair lay flat against his head.

He scanned the coffeehouse and stalked over to the mayor.

“Do you think I need to take the kids out?” Hope asked as we all noticed the seriousness of the situation taking place between the sheriff and the mayor, both elected officials by the good citizens of Honey Springs.

“No. I think it’s all safe in here.” I tried not to alarm her since I did know a few things about the law.

By education, I was a lawyer. I’d left my law firm I’d shared with my ex-husband and moved to Honey Springs, where I had very fond memories of my time spent here with Aunt Maxi.

Wasn’t that the case? When we were hurt, didn’t we desperately seek times in our lives when we recalled we were the happiest?

That, for me, was Honey Springs and the long summer days and nights I’d spent on this very boardwalk as a teenager. Back then, there were just a few shops, including the Crooked Cat, the local bookstore that was still here.

Long story short, Aunt Maxi had this building unoccupied from a recent tenant, and it was easy to dream up my own coffee shop. She insisted on it, really, and I was so glad she did.

Years later I was married to Patrick Cane, the boy I’d chased all over Honey Springs in those teenage years, and we had two fur babies. Sassy was a black Standard Poodle who belonged to Patrick, and Pepper, a salt-and-pepper schnauzer, who had adopted me when I went to Pet Palace, Honey Springs’s local SPCA.

“Stop gawking and close your mouth.” I leaned around Aunt Maxi and stuck my face in front of hers. She was staring right at the mayor and Spencer as the two of them had a very heated conversation.

“If you don’t get that budget passed, you won’t have this cushy job.” Spencer’s words had a bite to them that didn’t sit too well with the mayor.

“If you don’t get these crimes under control, I’ll see to it that my main platform this year will be to find our city a real sheriff who can keep the citizens of Honey Springs safe.” The mayor was all too aware that the locals had been a little concerned with some of the crime that’d found its way into Honey Springs, leaving us with the task of making sure we kept our doors locked.

Something locals had rarely done in this part of Kentucky.

Honey Springs was a little lake tourist town that not only was secluded from big cities and surrounded by beautiful hills and Kentucky bluegrass, but located on Lake Honey Springs, where fishing, boating, and lazy days spent in a rental cabin was just part of daily life.

“Help! Help!” Loretta Bebe busted through the coffeehouse door all aflutter, almost coming out of her jeweled strappy sandals.

“Hey-lup!” She screamed in her very southern accent. Her head twirled around. She snapped her eyes at Sheriff Shepard Spencer. “I’ve been robbed! Right out in the parking lot! In daylight!”

She pointed directly at Spencer with her perfectly polished and manicured finger.

“You!” She gasped. The sparkle of the afternoon sun had filtered through the windows of the coffeehouse and landed perfectly on her shiny diamond ring. “Get out there and do your job. Find my purse or else!”