Hey y’all!! It’s time for me to let y’all know about the plans with the Southern Magical Bakery series. 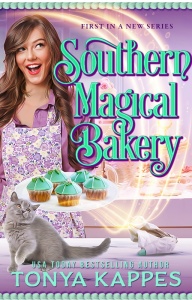 The series is based on Lo Heal-Park. She is the adult daughter of June Heal and Oscar Park from the Magical Cures Cozy Mystery Series. Lo is unable to live in Whispering Falls because she’s not a spiritualist, which is a village rule. She did find a wonderful talent! She took her job as an employee at Wicked Good Bakery very serious and became an excellent baker.

She was given special classes at UnHidden Hall A Spiritualist University since she’s not able to take the usual classes offered there to witches and wizards so she did graduate with a culinary arts degree.

Lo has gotten approval from The Mary’s and the Village Council to move out of Whispering Falls and start a life of her own where she will open her own bakery in a mortal town.

Characters from the Magical Cures Series will be going to visit Lo and help her out since Lo will have no choice but to scratch her nosy side by learning to become an amateur sleuth in this fun baking cozy mystery.

Here is where you will be able to read this episodic culinary cozy mystery. I’m going to be publishing the episodes on Patreon and on Kindle Vella.

I’d already planned to write this in episodic form on my website until Amazon asked if I would interested in joining them on a new adventure – Vella.

Kindle Vella is a paid per episode. Each one of the daily episodes in the Southern Magical Bakery will cost about 9-11 tokens.
Tokens?

With Kindle Vella, I’m able to offer the story on their new platform and also on my Cozy Krew Patreon Group.

What is Patreon and why do I have to pay you ask? Patreon is a special group of readers who want ALL THINGS books. They get over 17 days of extra content you don’t get anywhere else depending on the tier they join. They also get ARC copies of each book and extra character content as well as behind the scene character profiles.

Why are you doing this on Patreon? I’m not able to offer Southern Magical Bakery in Kindle Unlimited, book form, ebook form, or for free in anyway while in Kindle Vella. (YOU”RE GOING TO SEE A LOT OF AUTHORS DOING VELLA-just a side note so be prepared.)

That is why it will be on the Patreon page for y’all to enjoy for ONLY $1 a month! For ONE DOLLAR you can join my Patreon group and read the daily serial starting on July 1st!

The way I’m releasing Southern Magical Bakery isn’t about making money so do the math if you’re thinking that. $1 a month isn’t even going to buy Rowena treats. BUT it’s a way I can offer the story to those of you who LOVE the Magical Cures Cozy Mystery Series for a great price while blazing the trail for a new way to read through Kindle Vella.

I can’t wait for y’all to read it each day and excited for the new adventures of Lo Heal-Park and the amazing crossover character interaction from the Magical Cures Series.

On Friday you’re going to get a special, Patreon only, Father’s Day letter from Osar Park!
Lots of love and get excited!!!!

So if you want to join Patreon, we’d love to have you! Join the $1 tier when signing up unless you do want to get all the extra content the other tiers offer.