Hi-do! Welcome to The Bean Hive. I’m Bunny Bowowski. You can grab a regular coffee from the coffee bar or a tea. But you look like you want one of them fancy drinks like a latte, or one of them caramel macchiato. You know, they are filled with sugar. Don’t take my word for it. I’m just a customer. The real owner is Roxanne Bloom, Roxy if you know her. I probably shouldn’t tell you this, but she’s asked me to look after the coffee house while she headed down to the police station.

Mmmhmmm. Now Roxy finding Alexis Roarke murdered is just hearsay because I haven’t really talked to her, but I heard it from  Crissy down at the Honey Comb Salon. She’d know because she and Roxy were friends twelve years ago.

It seems so long ago, but it ain’t. Roxy hasn’t been back to Honey Springs in twelve years, but the two of them, Crissy and Roxy, they picked up like no time had passed. You know, we do that in small towns.

Oh, yeah. The police station. Here, have a honey doughnut with that coffee. Lips smackin’ good I’m telling you. You’ll be back for more.

Anyways, Roxy’s Aunt Maxi and Alexis Roarke really don’t get along too well. Didn’t get along, that is. In fact, they’d just had a public spat yesterday. Roxy went down to The Crooked Cat Book Store, Alexis’s store, to offer what I’d call a peace offering in the form of a cup of coffee and doughnut. This is where is gets good.

Alexis. Dead. Murdered. Not only that, but BANNED was stamped on her forehead. You know, Alexis used that stamp on the banned books in The Crooked Cats’ banned book section. Mmmhhhhmmm.

Now that’s just hearsay. Though I do know that Roxy is down at the police station trying to get her Aunt Maxi out of some kind of hot water. After all, just a few months ago before Roxy moved back to Honey Springs, she was one of them fancy lawyers.

Mmmhmmmm. Nothin’ like this has happened in Honey Springs. . .ever.
Now, you come on back. Remember that around these parts, the gossip is just as hot as the coffee. Toodles!

Readers: Do you like recipes in your cozies? Do you ever make the recipes? Leave a comment for a chance to win one of the IT’S A SOUTHERN MYSTERY, Y’ALL measuring spoon and Kappes mini-tote. Winner will be announced on February 18th. 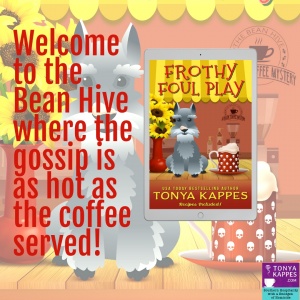 3 Comments on “A Day in the Life of Bunny Bowowski”